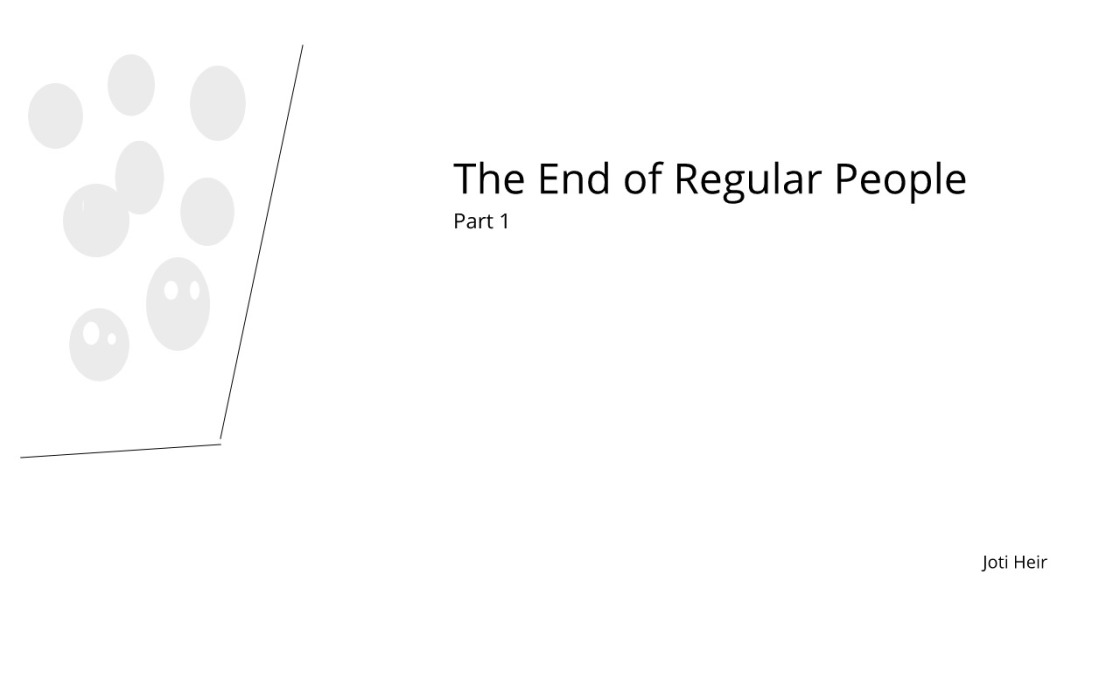 The End Of Regular People

They say the free places in in the Arctic are nice,  but I don’t want to go. But also there is no place to stay here. The money runs out next month.

I’ve got to think of something before that happens.

But there are no jobs, well at least not for regular people.

If only I’d become an actor. I’m sure I’d be good at it, but I was too shy. It’s stupid being shy.

“Please step back from your cart,” said the cashier.

She swiped her arm over it.

She said please, but I knew she didn’t mean it.

It took half an hour to walk home and those groceries were heavy, but Mom had sold the car a year back. That was also when they’d stopped running the buses.

The sun was just setting, which made all sorts of strange shadows on the snow. At this time of the day, this area looked so pretty. In the day it was just regular.

Mom was whipping up her famous lentil soup when I got home. It was the fourth time this week. But it was actually really good so I didn’t mind. Plus it was cheap.

“I think these groceries better last us two weeks, it was almost $160 Mom,” I said to her.

“Ok dear, you know Sarni told me that the Featherstones are looking for a dog walker, they, I think that would be a great opportunity. I think I’m going to give it a go, it’ll be an adventure,” she said with a big smile.

“Mom, for one, you’’ve never taken care of a dog, and two, I think that job won’t pay enough to cover the utilities, let alone the rent,” I said to her.

“Well, I can’t just sit around, I’ve got to do something, it’s been almost a year since the banks closed, I really don’t know what else to do,” she said.

“What about that chef’s course, you’ve been doing online?”

“Yes, me and every other person out there, there’s no point, it’s too competitive for me, especially with all the youngsters like you trying to get the same jobs,” she said.

“Ok Mom, do what you think is right, i’m just going to go change and I’ll come help you.”

The sun was just licking Lake Ontario before it disappeared until tomorrow and the snow seemed to be coming down faster than before. We were never going to be able to find another place like this one. It didn’t sit on Lake Ontario, but we were on the 22nd floor so we could see the lake as well as the CN Tower from our windows.

My room had a giant window so it was like having a living landscape hanging on your wall. I changed into comfy clothes and headed to help Mom.

“Everything’s all done here, just call Meep and we can sit down,” said Mom.

Meep was in his room, on his computer as usual and said he wasn’t hungry as usual.

“You have to come and have dinner,  you know that’s the rule, let’s go,” I said to him.

He got up and walked past me without looking at me.

Mom served up her soup, along with some rice and a mixed green salad.

Meep put everything in a large bowl, mixed it up and inhaled it within minutes.

“I have finished Mom, I must get back to my computer and do some work,” he said.

“How much work could you possibly have, you’re 10 years old and you’ve been on the computer all day,” I said to him.

“August, the kids are getting a lot of work these days, it’s different from when you were his age. It’s been a decade since you were in grade school, a lot has changed since then, kids are more advanced now, Meeps, you go ahead,” said Mom.

“Mom, he needs to spend time with his family too, they can’t be working a 10-year-old that hard.”

“We’ve got other things to worry about, you let him alone,” she said.

I got up the next morning at 7:50  for my 8 o’clock lesson on The Benefit of Mythical Creatures in Advertising. I had to say it was a pretty interesting course and thank goodness it was because learning at 8 a.m. is no easy task.

I brushed my hair and sat down at my computer. It looked like the professor hadn’t actually taken the time to brush his hair, but everyone was there and class started right on time. I had really thought that university classes were going to be different somehow than high school classes, but really they weren’t.

If I just stopped with this course, as I probably should since mom’s dog walking wasn’t going to keep us afloat, I could get a job. And if I stopped studying maybe I could pick up some jobs to do so we wouldn’t have to leave here.

My head felt jumbled like there were too many things happening at the same time. And they were all happening, but it was like they were yelling what was happening and I couldn’t hear a single one clearly.

I had heard that getting your blood pumping was a good way to get your brain to think better so I looked up a home workout video and got my pump on.

After finishing, I sat there and waited for a solution to come to my head, but it didn’t.

A video call request popped up on my screen. It was Dean. I didn’t feel like talking to people who didn’t have to worry about getting kicked out of their home. I’d have to answer and pretend like everything was just rosy.

“Guess what, I got the job,” yelled Mom.

Mom was unpacking a big bag of groceries in the kitchen. There was a chocolate cake in a plastic container sitting on the counter.

“I am officially a dog walker, doesn’t that just sound so modern,” she said to me as I walked into the kitchen.

“Congratulations Mom, I just bought groceries yesterday and we shouldn’t be buying anything for two weeks,” I said to her.

“Oh relax, everything is going to be ok, they’ve got three dogs, they want me to walk them twice a day, seven days a week, it’ll cover the rent and we’ll figure out the other stuff,” she said as she whistled away with a big smile on her face.

“That’s great Mom, but we should be saving money for the other stuff, not splurging on chocolate cake in plastic boxes.”

“You know you sound just like your father when you talk like that and that isn’t a compliment August dear, just relaxx,” she said.

It certainly wasn’t a compliment, he was an asshole who’d ran off with his girlfriend when this whole craziness started three years ago. He was a big huge asshole and I was nothing like him. I knew she just said it to get on my nerves. And my nerves were currently heaving so she did a good job.

It had been just three months into the virus. We were all stuck at home, but said father was still going to his job. He was a doctor. I say was, but maybe he still is, I don’t know. Sometimes he’d be on shift for so many hours that he’d sleep at the hospital for days. But the days turned into weeks. And then when it hit a month I asked Mom what was going on.

“He’s busy August, stop being so questiony, it’s a crazy time, everything will get back to normal soon,” she had said.

One week later, a moving company showed up at our apartment. Mom called father, and he told her they were there to take his things and he wasn’t coming back.

She simply hung up the phone, let them come in and take all of his stuff from his office and all his clothes too. They packed it up and went off with it.

And then just continued on as if everything was normal.

I was too angry to say anything. I didn’t know who was more stupid, him or her, and I still don’t.

“Meeps, Meepo, I’ve got a treat for you, it’s your favorite chocolate cake,” yelled Mom.

She cut a piece and took it to his room.